The Masculine in A Woman’s Psyche 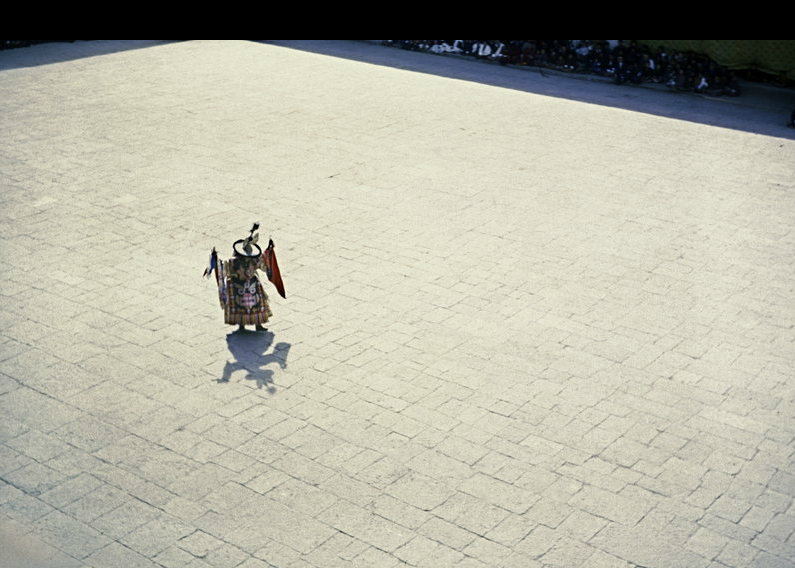 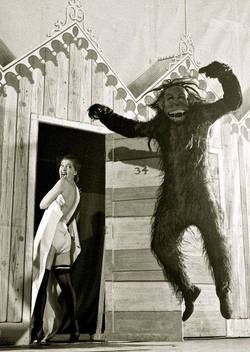 The animus, or masculine in a woman’s psyche, is quite a large topic. For the brief sake of this blog I will focus only on one possible example of this archetype.  This one example can be understood as how the animus may appear when a woman is not aware of this energy within her.

The emergence of the masculine archetype can often show up  in women’s dreams.  When the woman is not aware that she has a “masculine” side to her inside- she might have a dream such as this image on the left.  Here she is, perhaps getting ready to enter into the “restroom”/”changing room”/”bathroom”/….. ALL places where men are not “supposed” to be.  Her feminine self is private and she wants to maintain this privacy,  but then all of a sudden there appears an ape man who frightens her.  She screams.  Usually this is the place in the dream where the woman begins to run, looks for her cell phone to call 911, but alas… there is no voice when she screams… nothing comes out.  OR, her cell phone won’t work.  She tries to dial 911, but the numbers are confused.  The police answer on the other end asking if anything is wrong, but she cannot speak- she has gum in her mouth, she squeaks like a mouse instead of speaking, she moans and nothing audible comes out.  She runs.  The ape man is close behind.  She is certain that his intention is to kill her.  She wakes up in a cold sweat from the dream her heart pounding.

A version of this dream, the threat of being abducted,  has been had by generations of women. I used to have dreams like this in college when I was in my 20’s.  Many of those dreams occurred down in the subways of New York City- a most perfect symbol for the mazes of the Underworld.

If the woman were to turn toward the hairy ape and ask him what he wanted (most women DO NOT do this…) he might hand her a flower or extend his lips for a kiss.  “YUCK!”,  might be the archetypal feminine’s natural reaction to the other inside of her.  “Oh,” she says, “WHY can’t I just be left alone?”

The masculine is an important part of a woman finding her voice, using her mind, expressing her ideas, and exploring her creativity.  When he is ignored, he causes mischief.  A whole lot of mischief.   He can even make a woman go crazy.  I think about the generations of women who were not allowed to work.   Some of those women, especially those who were meant to be creative or to learn in higher education, went crazy.  If women were not allowed to use or explore their minds through education or express themselves through creative means, the energy of the animus gets “backed up” in the unconscious and he, in this regard, can become very very frightening.  Creative and sexual energies in the woman become blocked but come out through expressions of anger and rage, physical illness, mental illness, depression, anxiety and drug and alcohol abuse.

The aspect of the feminine that wishes to remain “virginal”/girlish and not receptive to the masculine creative forces might find, in her dreams, a very angry rapist or killer.   A man who is intent to penetrate her even if this is by using force.

The myth of Persephone is regarded as one of the best in understanding that the feminine must be initiated by encountering and being penetrated by the “dark other” in her unconscious- the Underworld.  Hades does not have the same energy as prince charming.  At least he doesn’t in my psyche.

The masculine inside a woman needs caring attention.  She needs to turn to face this often “primitive, brutish” other inside and educate him about HOW he needs to relate to her in order for them to be of partnership.  He does not have the final say- she does.  But, she must turn toward this other and see what he wants to say.  If this energy is worked with he can be her greatest ally in her creative self expression.  Although he may seem like a bit of a primitive beast at times, the possibility for transformation is ever present.   To see the union of the creative animus and a woman’s strong feeling value can be a very, very powerful thing indeed!  This is what women are actually often mistakenly running from…. their own connection to a positive creative power- even if at first he looks very much like an ape.

I would just ask you to remember, apes have a tremendous amount of energy.  This energy is the energy of the psyche.  As Jung famously said, “The Unconscious turns the same face to you as you do to it…”  Our own attitudes towards the energies of the Unconscious are what is most important.  Things in dreams are not always what they appear to be.  Sometimes we need to allow what is most frightening a voice.  Allow it to be heard.  Have a dialogue with it and see what it has to say.  You might just find yourself a bit surprised.  To me, it looks like like both the woman in the image AND the ape are a bit surprised by encountering each other.  The one didn’t know that the other even existed.  Now I find that utterly fascinating….!!  But then again, that is another Jungian topic to big to write about here- the nature of the opposites.